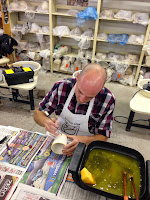 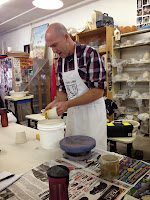 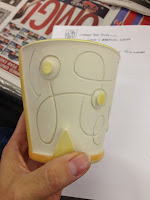 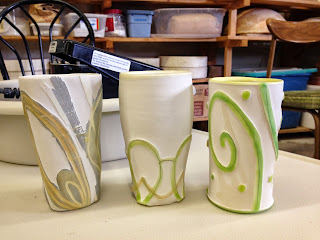 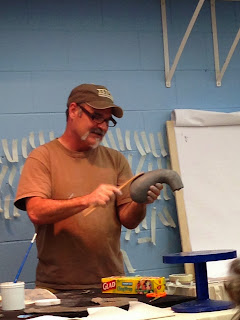 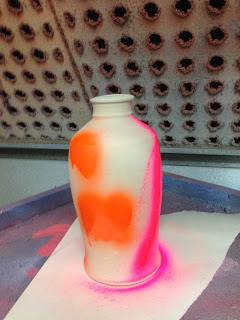 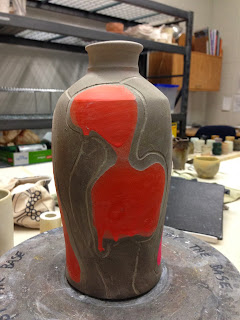 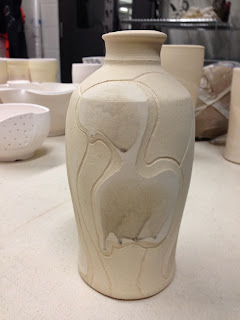 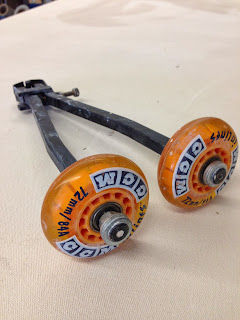 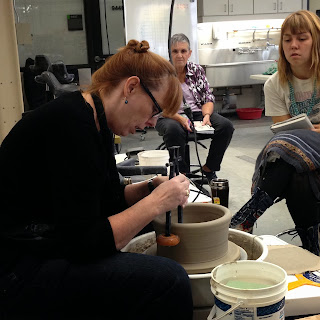 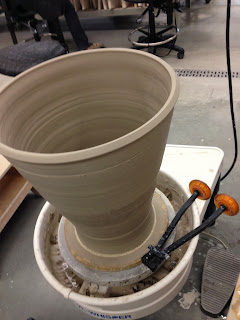 Next week I will be giving a demonstration on throwing bowls to the second year Ceramics students so I thought I would throw a few bowl styles to have trimmed and finished so they can see where it starts wet and where it can end up after altering, trimming and finishing.  Here are a couple I made today.  I also made a rimmed bowl and what I call a tulip bowl. 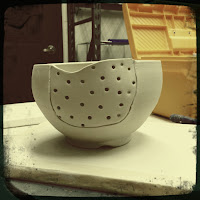 To make this style I made a simple upright bowl. I then cut out a section, textured it and re-added it to the bowl.  I altered the rim and pressed it in.   I think next time I will make a more obvious shape for the cut out similar to the cups I made last weekend which I will post as well.  This bowl was made with Coleman Porcelain, Cone 10.

I then took some Plainsman H440 and threw a similar bowl.  I made small balls of the Coleman Porcelain and attached them in a regular pattern. 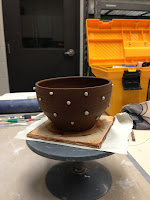 I then pressed into those balls of clay with the end of a wood skewer and here are the results - a quilted look with contrasting clays. 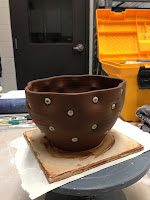 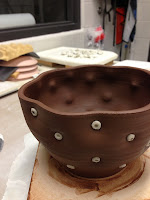 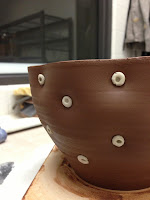 Posted by Tara Lynne Franco at 1:57 AM No comments:

Transferring a Pattern or Text to Clay and Soft Slab Construction

I learned a little tip this week - how to transfer a pattern, text or image to clay from paper.  This was originally shown to me as a way of transferring text to clay to make a "chop" so that the text is backwards, but I used this method to transfer a pattern I drew on newsprint to a rolled slab to make a hand-built spout for a soft slab vessel I made today.  First you draw out your pattern or text onto newsprint or other paper.  Trace over the design with a non-permanent Staedtler marker.  Then place the paper face down on your clay, rub over the surface where the line is and ta da ... the image or text is transfered!  I had a video but I cannot seem to post it.

Here is the final soft slab pot I created.  the body shape was inspired by a Margaret Bohls teapot. Check out this link for instructions on how to make her teapot on Ceramic Arts Daily.  http://ceramicartsdaily.org/pottery-making-techniques/handbuilding-techniques/drawing-in-space-how-to-handbuild-an-expressive-teapot-set-using-soft-slabs/ 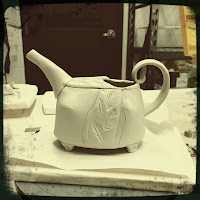 The body was made with an oval slab and 4 triangle shapes were cut from the top and then the pieces attached to each other, narrowing the top and creating pointed darts in four sections.

I added a textured section on the top, a hand-built spout I made from a paper pattern roughly the shape of a whale tail (also inspired by Margaret Bohl's teapot), and finally a curled handle and  feet to lift it off the table.  A little bit more texture and lines and it was complete.

Not bad considering I was going to give up after I completed the darting!
Posted by Tara Lynne Franco at 1:12 AM No comments:


It's been a long time since I posted but I hope to improve as I embark on a new journey in clay... My Red Deer Residency.

I've moved across the country to Red Deer Alberta where I've taken a post as the Ceramics Technician at Red Deer College in the Visual Arts department.  I have a fantastic state-of-the-art facility to work in as well as my own dedicated studio space to call my own.

Ceramics is headed up by Trudy Golley (www.alluvium.ca).


I am looking forward to being inspired by Trudy, her work, and the many lectures and demonstrations she will give over the course of the next 9 months. I plan to do most, if not all of the projects she gives her classes as a way of trying out new techniques and new forms.

Posted by Tara Lynne Franco at 12:24 AM No comments:

I am thrilled to have completed a very special commission for a wonderful local church in Hamilton - New City Church http://www.newcity-church.com/ - which is led by Pastor Connan Kublick. I designed and carved a custom stamp based on an illustration by a local artist and produced a set of 4 chalices and 2 lidded wine pitchers in white porcelain. These pieces had their debut this past weekend. It was a great honour to be asked to produce this lovely set. 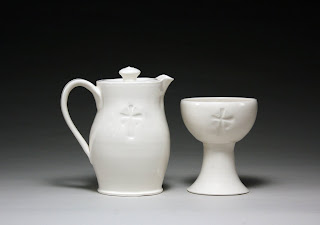 Posted by Tara Lynne Franco at 8:38 AM No comments: 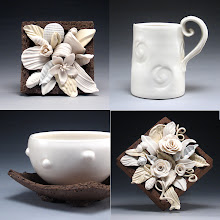